What Is The Difference Between Biltong & Beef Jerky?

It’s a showdown for the ages, folks. In this corner, we have that famous American classic, Beef Jerky, flexing its tough, smokey muscles. Entering the ring with a skip in its savory step is the formidable challenger, Biltong (a seasoned culinary veteran, yet a relative newcomer to the American scene). When these titans of taste collide, what will be the major beef? For a full blow by blow… 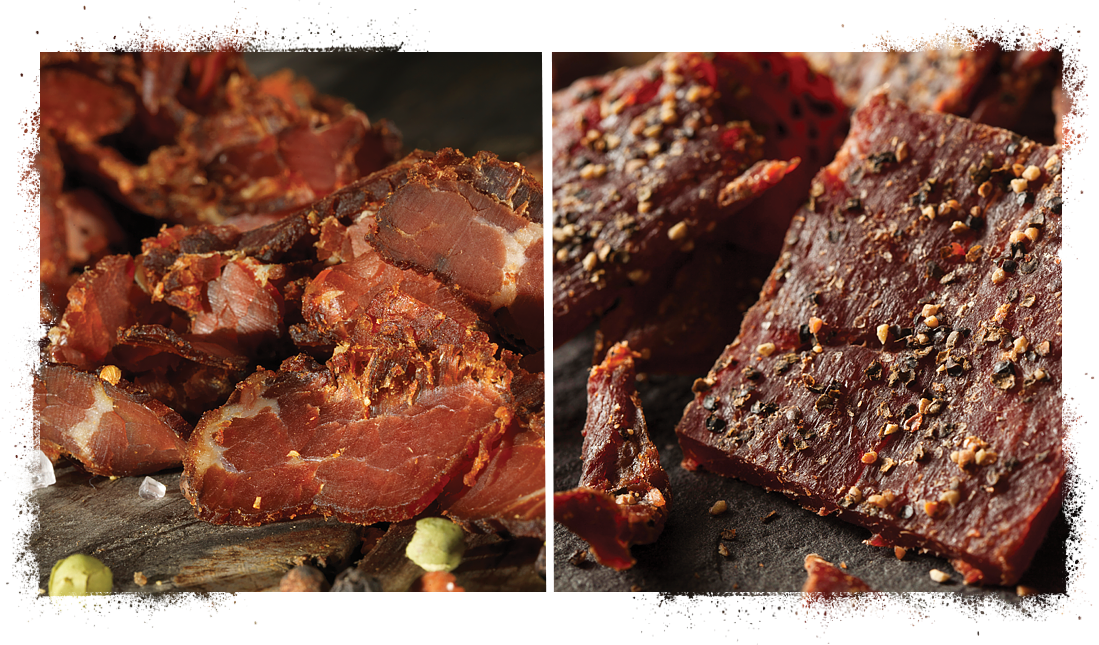 For far too long, confusion has reigned as to the difference – if any – between biltong and beef jerky. Many believe they’re one and the same, synonymous descriptors for the identical culinary delight when, in fact, this couldn’t be any further from the truth.

At a glance, they might look about the same (both are dried and cured meat products, after all, hence the confusion), but that’s where the similarity ends and they become very different beasts indeed. It’s time to set the record straight. Let’s settle the beef once and for all, shall we?

Biltong and beef jerky have both been around for centuries. A relatively new kid on the American butcher’s block, biltong was discovered in South Africa in the 17th century by Dutch settlers who cured their meat with salt, vinegar and natural spices before hanging it to dry. They needed a sustainable food source for their arduous, long-distance journeys across a bold new frontier and biltong was simply it. Unbelievably tasty, tender and healthy, its legend has grown and it has recently made tremendous inroads across the globe as more people are starting to recognize it for the culinary crown jewel that it is.

Beef jerky is believed to date back to an ancient Inca tribe called the Quechua, who coined the term ‘ch’arki’ (which, over time, has evolved into ‘jerky’). It aptly means dried meat. The Quechua are believed to have made jerky as early as the 1500’s. When the first Europeans arrived in the New World, they discovered that this hardy, nutritious new food source was tailormade for travelling and it immediately became the snack of choice, eventually becoming an American classic.

Both biltong and beef jerky can be made from a variety of meats, including bison, pork, chicken, ostrich, antelope and even turkey, yet the classic staple for both mighty meat snacks is undoubtedly beef. Biltong and beef jerky might look similar at a glance, but their production processes are worlds apart.

Beef jerky is created via marinading, then smoking, salting and cooking thinly sliced strips of meat in an oven or drying it on a rack in a dehydrator for up to 12 hours. The salt helps to draw out the moisture and gives a bite of flavor to the meat. The heating and dehydration process makes the meat pretty tough though, which is why it’s often soaked in a salty-sweet marinade afterwards, to bring out the flavor and help tenderize it a bit.

Biltong is sliced much thicker before being immersed in a combination of vinegar and natural spices, traditionally including a mixture of salt, pepper and ground coriander. It is left overnight, then patted down and hung up to dry (often for up to 5 days or more). The vinegar, salt, and spices in the biltong, alongside the air-drying process, cures the meat as well as adding texture and infusing it with intense flavor. No heat is applied, nor is biltong ever smoked, unlike beef jerky.

When it comes to making biltong, vinegar is undoubtedly the star of the show. In fact, you couldn’t preserve the meat without it. As for spices, most biltong makers honor the centuries-old tradition of using cloves, allspice, pepper and ground coriander, as well as a tasty dose of salt. The traditional recipe also excludes sugar, which has tremendous health benefits. Unlike biltong, you won’t find vinegar going anywhere near jerky during the production process.

As beef jerky is cooked in ovens or dehydrators, often artificial flavoring agents and a very high salt/sugar content are added to heighten the taste of the meat. In short: jerky’s flavored by means of marinades and/or spice rubs, whereas biltong contains simpler, more natural spices and seasoning. So basically the same meat to start out with, yet different methods and spice combinations result in two completely different meat snacks. And therein, friends and neighbors, lies the rub.

When you take a bite of beef jerky, you’ll taste the smokiness and dryness right away. Infused with sugary marinades, it also tastes much sweeter. Having been cured using a mixture of vinegar and deep, strong spices every step of the way, biltong has that extra notch of flavor. It also packs a juicier punch, often having a slightly higher amount of fat running through the meat. Jerky has less fat – hence why it’s drier (and also much tougher on the teeth). Compared to smokey beef jerky, biltong (which is never smoked) has a much meatier, deeper flavor.

While their tastes differ – and thankfully so, for variety is the spice of life – one thing meat connoisseurs everywhere can agree on is that both of these dried and cured meat snacks are lip-smackingly delicious. Beef appétit.

Even in this category, biltong and beef jerky are wildly different. Biltong’s far more tender and chewy, whereas jerky’s much tougher and hard. In its most basic form, biltong is basically a dried steak, therefore its texture can range from hard, chewier cuts to softer, moister varieties. It all depends on how long it was cured and air-dried for. Because a dehydrator or oven is used to make jerky, the process itself results in a much drier snack. Jerky can be tooth-chippingly tough, whereas biltong is a lot more succulent and easy on the jaw, so when it comes to tenderizing the meat and not your teeth, we have a pretty obvious winner.

While both biltong and beef jerky are utterly delicious, game-changing meat snacks that makes the world a better place by virtue of the mere fact that they exist, one truly outshines the other when it comes to health benefits. When you pit beef against other meats, it serves up more zinc, iron, B12, B6 and selenium than it’s closest competitor. It’s pretty powerful stuff.

Biltong and beef jerky both pack a mighty protein punch (biltong even moreso), but which one lands the KO when it comes to your health? Rather than being cooked or dehydrated, biltong’s air-dried curing process uses no heat (therefore no nutrients are broken down or lost) and locks in almost all of the meat’s minerals, vitamins, proteins and all nine essential amino acids (for fat burning, muscle growth, reduced mental fatigue and much, much more…).

Containing zero sugar also makes biltong the ideal choice for Keto, Paleo and Whole30 diets. Not relying on artificial flavoring and rather utilizing all-natural ingredients, biltong also tends to be much leaner. An average serving contains nearly 50 percent of your daily protein needs, making biltong the health-conscious choice by a clear country mile.

So, no matter how you slice it…
Good. Better. Biltong.

<   Is There Something Like The Perfect Biltong Recipe?
Biltong Jerky or Beef Biltong?   >