Which is better: biltong jerky or beef biltong? Whoa, time out, hold on just one red-hot second. Did we really just say “biltong jerky”? Is there even such a thing? Will the space-time continuum fold in upon itself or the dried meat snacking industry spontaneously combust in a world where it exists? For the full lowdown… 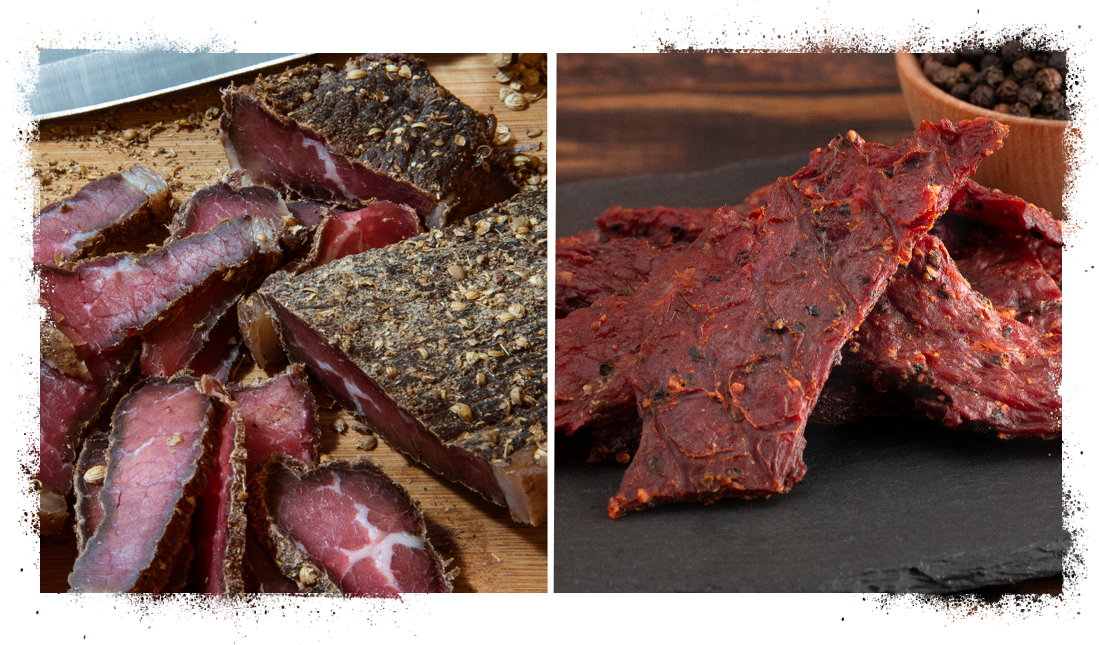 Chinese checkers is one example. Guinea pigs are another. Chinese checkers is not a form of checkers, you see, nor is it from China, while Guinea pigs are neither pigs nor from Guinea (they’re actually rodents that originated in the Andes and, by the way, cute as a furry button). In short, a misnomer is the wrong or inaccurate use of a name or term. Can you guess where we’re headed with this train of logic? Yep, you nailed it.

Biltong jerky is another sterling example of a misnomer, ’cause, folks, ain’t no such thing exists! It was probably invented as a clever marketing phrase or Google search term to introduce biltong to jerky enthusiasts and/or to drum up interest in both biltong and jerky (which are often mistakenly thought of as the same thing, but they’re actually vastly different; these two titans also happen to be fierce competitors in the dried meat snacking world). While we have your attention, though, let’s take a look at something that’s no mistake and certainly no misnomer – simply air-dried beef in its purest, most delicious form, namely…

Getting back to that not quite so clever marketing strategy of attempting to introduce biltong to jerky enthusiasts, calling beef biltong biltong jerky is actually more than a misnomer – it crosses the line of confusion to become downright misleading. We’ve written another blog entry explaining the differences between biltong and beef jerky in greater detail, which you can find here, but to summarize:

Now do you see why biltong jerky is actually more than a misnomer? It’s either one or the other, folks; it simply cannot be both. All things considered, however, biltong is – and always have been – the healthier, all-natural and (dare we say it? yes, we do!) simply more delicious choice.

One question remains: why call it beef biltong and not just biltong? The answer is that biltong can be made from a variety of different meats, including ostrich, venison, chicken, pork and even bison right here in the US of A, but the original, most famous and certainly most popular form of biltong – the OG of its kind – is and will forever remain that bold, brilliant and beguiling classic simply known as beef biltong.

Be sure to remember the name: it’s beef biltong, Made by True-ers, not biltong jerky. No misnomers, no mistakes, just the honest to goodness, melt in your mouth, trot a tantalizing tango across your taste buds, real deal, accept no substitute, plainly and utterly most amazing air-dried meat snack the world has ever known. Click on our order page to get your slice, stick or slab of the glory today.

<   What Is The Difference Between Biltong & Beef Jerky?
Different Uses For A Sliced Biltong Slab   >